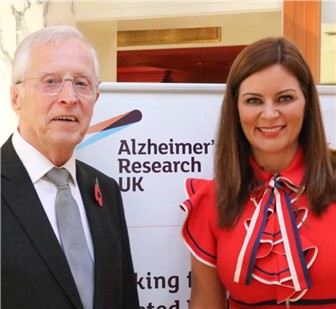 Maguire Family Law are delighted to announce that a remarkable £7000 was raised for Alzheimer’s Research UK following their spectacular charity luncheon at the award winning San Carlo Fiorentina Restaurant on Thursday 9th November.

The event, organised by Eimear Maguire, saw a variety of local businesses come together to show their generosity and support at the charity luncheon by way of attendance and the donation of superb prizes. A total of 120 people came along to the luncheon helping to collectively raise £7000, £2,600 more than was raised at the event last year.

“Without effective treatments, one in three children born today will die with dementia.”

A harrowing statistic that could have been no better epitomised than through the heart felt words of Fred Walker, ambassador for Alzheimer’s research UK, who brought the room to tears as he relived the struggles of his wife’s final few years as a sufferer of Alzheimer’s. Fred, a retired engineer, has tirelessly fundraised since the passing of his wife to the disease and has even published a book titled ‘Alzheimer’s: An Engineer’s View,’ in which all sale proceeds are donated to charity.

Research costs Alzheimer’s UK £20 per hour, which means that thanks to the £7000 raised by the Maguire Family Law charity luncheon, 350 whole hours of research can be carried out.

Over the past decade the donations made to Alzheimer’s Research UK have helped them in the discovery of 21 genes linked to an altered risk of Alzheimer’s. Thanks to these landmark discoveries, researchers now believe they understand the genetic changes responsible for over half of our genetic risk of the disease. This has sparked an important new avenue of investigation in the search for new treatments and home health care services but there is still more research to be done and every donation matters.

Globally, the numbers of people living with dementia will increase from 46.8million in 2015 to 131.5million in 2050, a 281% increase. The money raised by Maguire Family Law can help to reduce those statistics and hopefully make a life changing difference.

Special thanks to The Drawing Room Creative for creating and supplying table plans, invitations & prize lists.