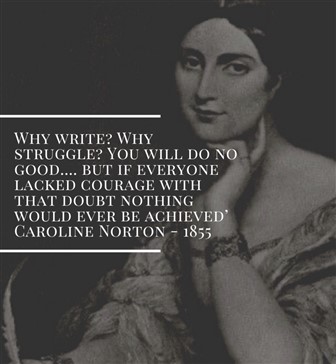 On International Women’s Day we celebrate the woman who achieved legal rights for women in England.

Historically women were seen in law as a chattel of their husband. I know – can you imagine?!

The reign of Christianity held the sanctity of marriage at its core making the dissolution of marriage unheard of. In fact, the Roman Catholic church ruled that marriage rendered man and wife as one in the eyes of the law and, of course, it was the woman who had to renounce her position.

In Victorian times the husband had the right to lock his wife up. If he beat her she had no redress and the husband had full rights to any income, property and finances belonging to his wife.

At that time divorce had serious social stigmas and financial implications – and still does to an extent even now. It is true that even when divorce was granted the children were deemed illegitimate. All good enough reasons to mean most women would remain trapped in difficult, often abusive and loveless marriages.

Enter Caroline Norton, who after a nine-year marriage, took the brave move of leaving a difficult marriage. She had serious political disagreements with her husband and was physically assaulted where their servants had to intervene to protect her. Some might say it was a marriage of convenience as he was an ambitious MP and she a penniless actress, author, model and socialite.  After leaving she soon realised her life was controlled by her husband still as the law still supported his control over her finances and access to their children. She did return on the first occasion for the sake of her children. Her husband hid her children with various relatives to prevent her access.

Caroline was bright and determined and tirelessly campaigned for changes to the law. She canvassed and enlisted powerful and influential people who could help her;

‘Why write? Why struggle? You will do no good… but if everyone lacked courage with that doubt nothing would ever be achieved.’

And how right she was – she is responsible for three Acts of Parliament:

Civil Court was open to Divorce for the first time. It still did not benefit women as much as men. Men could petition on the ground of adultery and name the third party. Women could only petition on the ground of adultery if combined with another offence eg; bigamy, incest or desertion. Women could not name a third party involved.

This Act gave women possession of their own earnings. A wife could now inherit in her own name.  Attached to this was a ruling that child maintenance was to be the responsibility of both parents.

After the Matrimonial Causes Act came into force divorce rates increased from 3 to 300 per annum. Women often had to abandon their petition as they were afforded only 1/3 of asset provision. The stigma and financial cost still meant that the vast majority were unable to see the process through.

Caroline Norton was a brave and tenacious woman and her courage defied the labels bestowed on her as a ‘scandalous’ and ‘dangerous’ woman.  In her letter to Queen Victoria in 1855 she wrote:

‘The natural position of woman is inferiority to man. Amen! … I never pretended to the wild and ridiculous doctrine of equality.’

Equality was not her battle but this would be challenged by many other great women to follow.  Caroline is a largely forgotten figure and today we remember her significant victory for women. Many women will resonate with her struggle and the fight for freedom and we reap the benefit of her labour with gratitude.