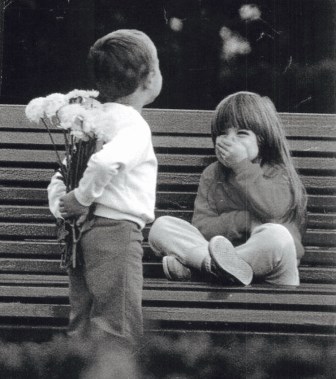 Whilst walking in Wilmslow the other day I witnessed a situation which provoked my thoughts on chivalry: where have you gone? A young woman came to a narrow point in the pavement.  A large vehicle had parked, mounting half the pavement, and an older (gentle?)man was approaching said narrowing towards her………what happened?  What would you expect might happen?  I would  like to say that the gentleman ushered the woman through the gap first but alas not.  Maybe both parties were oblivious to what had occurred and chivalry is actually dead and forgotten.

Perhaps chivalry is handed down from generation to generation like the family signet ring. You either have it or you don’t. We learn it all from our parents and boys are often taught by their mothers! ‘Offer seats, hold doors, pull out chairs, help with coats, buy flowers, carry heavy bags …..’ These are all normal, considerate actions, indicators of a good upbringing perhaps.  So where has it all gone wrong?

The term itself is medieval in origin, derived from the French ‘chevalier’ meaning horseman, knight or gallant young man. Chivalry was a noble code of courtesy and valour, part of which was to show respect and gallantry towards women. The code was admired and understood by all. Chivalry is not always associated with romance but  with respect. Surely this is still befitting in our modern world.

Some argue that feminism itself has called a halt to chivalry. A study at a Boston University has now concluded that chivalry can ‘mask chauvinistic and patronising views.’ It is worrying that this kind of research is given funding let alone air time. It is small wonder then that men have been scared off, terrified of being labelled ‘sexist’ if they dare to even help a woman.

In addition to this women’s expectations of men seem to have dramatically changed over the last decade. Influences of celebrity couples and social media offer unrealistic ideals.

In a world where considerate gestures seem to be graded by price tag chivalrous actions are downplayed, illusive or just sadly lacking.

Are men so beaten down by expectations that they have given up altogether?  If it’s not a Gucci handbag or a pair of Blahniks then maybe don’t bother? Is this part of the problem? Women themselves have caused the death of chivalry by creating unrealistic expectations. In my view it is the little gestures and small actions that are lacking, the things that cost nothing or very little. I’d be happy with an unexpected packet of rolo to brighten my day!

John Picciuto, (‘Why Chivalry is Dead) thinks women are responsible for the demise: ‘The real problem here is that women, for one reason or another, have become complacent and allowed men to get away with adhering to the bare minimum.’

Expect more ladies and it will all come back around!