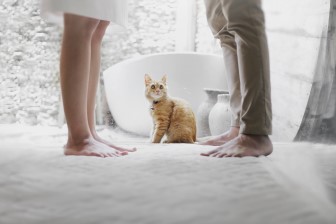 Britton and Vickery to Separate: Tabloids Ask Why?! We ask the Tabloids… why ask?

Following the announcement that TV presenter Fern Britton (62) and her husband, celebrity chef Paul Vickery (58) will be separating after 20 years of marriage together, the UK tabloids have all been searching for that elusive answer to ‘Why’?

Why, after 20 years of marriage, would two outwardly happy people decide to separate?

From one tabloid referring to family friction, busy work schedules and lack of lust between the pair, to another referring to previous comments about the couple leading separate lifestyles or how Britton would prefer a cup of tea over sex. Another incredibly went as far as linking the death of Britton’s father, Tony, who died aged 95 just three days before Christmas, to her separation from Vickery.

The reality is, it isn’t as simple as that.

What is clear, is that it would appear no one is listening to the matching statements Britton and Vickery released, which read:

After more than 20 happy years together, [we] have decided to go our separate ways. We will always share a great friendship and our lovely children.

We would appreciate it if our privacy is respected at this time. Thank you for your continued kindness and support.

Privacy. Respect. Support. Key things this couple have asked for as part of what can only be a very difficult and stressful time in their lives. Three things it would appear the media has chosen not to give them.

As a specialist family law team we know that people drift apart, and that’s ok. Separating after 20 years isn’t a failure, it’s a success this couple should be commended for. 20 happy years is a long time – well done to them!

There isn’t always an answer to why marriages break down – divorce isn’t as simple as that. It is fascinating however that outsiders feel the need to know why when the people involved often can’t give a simple answer themselves.

As time goes on and the UK introduces legislation removing the need for separating couples to blame one another if they wish to divorce prior to living apart for two years, it will hopefully become the norm that we can learn to accept that people drift apart. People divorce, and it doesn’t need to be anyone’s fault. There doesn’t need to be a reason. There doesn’t have to be an answer to ‘why’.

What is important, and what we strive for in our team at Maguire Family Law, is providing each and every client not only with the emotional support, but the practical and legal support should they choose this path at any stage in their lives. Whether a couple choose to separate after 20 years together, or whether they choose to separate after five, we understand that it isn’t always about the ‘why’, but rather the ‘what next’ that counts.

So spare a thought for Britton and Vickery. If you were in their position, would you want everyone trying to find the elusive ‘why’ answer? Or would you want what they have asked for? Privacy. Respect. Support. We at Maguire Family Law know which we would choose.