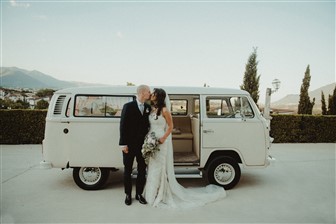 Could England and Wales achieve more freedom of choice on wedding venues?

The Law Commission has recently launched a consultation on changing the “unnecessarily restrictive” marriage regulations in England and Wales, with an aim to reduce the cost of ceremonies by allowing couples more freedom in choice when it comes to where they can get married.

As the law stands in England and Wales, for couples to get legally married it has to take place indoors at a licenced premises. In fact, the only weddings which can take place outdoors and remain legally valid are Jewish and Quaker weddings.

Whilst some couples may choose to have outdoor ceremonies, the reality is that in the eyes of the law they are symbolic only, and will still leave them having to attend a Registry office before or after their special day to actually get legally married.

Professor Nick Hopkins, Family Law Commissioner at the Law Commission, says: “A couple’s wedding day is one of the most important events in their lives, yet the 19th-century laws are not fit for purpose and stop many couples having a wedding that is meaningful and personal to them. Our proposals would give couples the freedom to choose the wedding venue they want and a ceremony that is meaningful for them. By doing so, we hope to make the laws that govern weddings reflect the wishes and needs of today’s society.”

The Law Commission is suggesting that weddings be able to take place “on beaches, in parks, in private gardens and on the grounds of current wedding venues”, however it is possible that many other options could be available if the proposed changes are taken up.

Alongside proposed changes to wedding venues, the Law Commission is also recommending that a new legal framework be set up “that could allow non-religious belief organisations (such as humanists) and/or independent celebrants to conduct legally binding weddings”.

The changes have the support of the justice secretary, Robert Buckland, who says: “We want couples from all walks of life to be able to marry and celebrate their love for each other in a way that is meaningful to them. That is why we asked the Law Commission to look at the laws around weddings to ensure they better reflect modern society, and we look forward to the outcome of this important consultation.”

The Law Commission will be consulting on the proposals until 3 December 2020, whereupon it will analyse the responses and use them to develop their final recommendations for the second half of 2021. As always, the team at Maguire Family Law will keep you updated on any developments as they occur.